Fully Loaded Satellites is the most successful team currently playing in the 1st Division in Ireland. The club is one of the oldest clubs in Ireland, and previously existed as Jossestown Rovers in England. Recent stats published by Kerry Lakers FC manager Mikstur have seen FLS confirmed as the all time top ranking team in Irish league competition. FLS have successfully avoided The Curse of the Irish First Division! 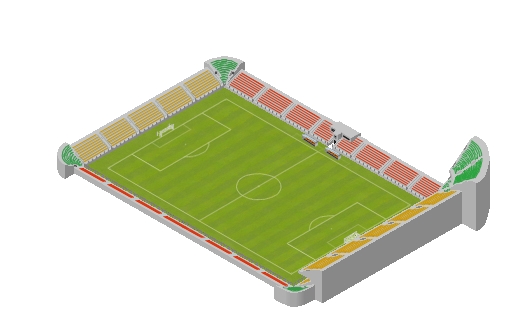 Ciderspace was recently expanded to a massive 26,000 capacity. This makes it the largest ground in the country. Before St. Marys Shamrocks went bankrupt, their arena was the largest arena. It is currently the home ground for the Ireland NT. The ground was previously known as Death Star Arena.

Fully Loaded Satellites was founded in December 2006. The club had previously been known as Jossestown Rovers in England. When the Irish league was created by Dugout, we jumped in straight away and were one of the first to do so. Six teams originally joined the league (alphabetically):

Season 3 started with a bang for the new Fully Loaded Satellites team. The manager forgot to actually set a team and thus we lost 5-0 to Spartak Wicklow, playing a 4-3-1 with striker Jacob Garvey in goal. We eventually went on to finish in second place, just 2 points off the top spot. That opening day debacle could have made the difference. FLS finished 2nd in the league in this season but also picked up the youth league.

FLS won the cup A quiet season for FLS topped by an unexpected cup win. The cup final itself was a bit of an anticlimax as the opponents that day, The Irish Silkmen, had just become inactive. The victory was very welcome though and gave FLS the funds to expand their facilities.

FLS had a poor season, characterised by a dreadful spell over the Christmas period at the end of 2007. In one dreadful week, FLS went out of contention in the league, the youth league and also got knocked out of the cup by lower league opposition. This was down to the manager not being able log in over the period and the default team was unfortunately set to the one last used in a friendly match.

FLS won the league, youth league and Irish Cup. This season broke all records for both FLS and Ireland. The famous treble had been won for the first time ever by one club.

FLS began the season with a massive spending spree, splashing out amounts unheard of in the history of the club or indeed the league.

FLS finished in 1st place in the 1st division, shattering The Curse of the Irish First Division. It was a close run thing though, the title was only won on the final day by 2 points. The club exited the cup in round 3 to eventual finalists Kerry Lakers FC. History was made as FLS became the first Irish club to progress to the Quarter Final stage of the Champions Cup, eventually losing to the finalists Sarajevo on penalties. We won the National Youth Cup but finished third in the Youth League and got knocked out early on in the International Youth Cup.

FLS won the Irish cup for the third time but finished 2nd in the league. Youth league performance was disappointing though.

FLS have purchased 2 irish internationals at the start of this season, the striker David McAteer and the left winger Oisin Boyle. There has been a massive clearout at the club. FLS won the treble for the 2nd time.

FLS currently top the 1st division and the youth league. We went out in debatable circumstances in the last 16 of the Champions cup. We are in the 1/4 finals of the Youth international cup and the Irish Cup.

Ulster Praetorians FC, St. Marys Shamrocks and Kerry Lakers FC are the clubs biggest rivals. The Irish Silkmen used to feature on this list but have recently relegated to amateur football.

Robert David MacKowen was the most famous player to ever grace the field for FLS. He was a powerful striker who played the lone forward role to perfection in season 3. He scored a huge amount of goals for his club and also went on to make 5 appearances for Ireland. He moved on to pastures new at the start of season 6.

Ben Walsh is the most famous player currently at the club. He has been feted as the saviour of Irish football for years now, and is starting to make his mark on the league. He famously scored a hattrick in a 6-1 defeat of the Irish Roos. He plays as a right fullback and has already appeared 8 times for his country.

The stated aims Fully Loaded Satellites have consistently been to prioritise the development of young, talented Irish players. We aim to provide the national teams of Ireland with top quality young internationals.

In the clubs first season in the newly formed Irish league, FLS won the First Division Youth league. That was a legendary team and most of the players are still playing with the club. The undoubted star of that side was Ben Walsh (see above). The team beat The Irish Silkmen to the title by a goal difference of +4. Neither team lost nor conceded a goal during their campaign.

The Satellites youth team finished a disappointing third in the youth league in season 7.

FLS youths finished in their worst ever position, 5th.

Retrieved from "https://dugout-online.fandom.com/wiki/Fully_Loaded_Satellites?oldid=5283"
Community content is available under CC-BY-SA unless otherwise noted.