Fevre fB is a Danish team, currently playing in the second best league in Denmark - 1. Division A. The club is one of the oldest clubs in Denmark, and has been playing from Season 1. It was founded in late March 2006 in Kolding.

The place where the magic happens is at the Stretford End with a capacity of 17,400. The stadium is well-known for it's beauty and all-blue seats.

Fevre fB was founded in March 2006. The club played its first match on March 11 against Emmenthaler and it was a success. Fevre fB won 1-0 at home and won the next five matches in the league too.

In the first season, many clubs had not hired a manager, so it made it all a bit easier, since the opponent players never really seemed to get things going. An easy win if you like.

The club was the first in Denmark to invest everything into the youth. The manager, Fevre, even sold two of the players from his best eleven. The 24-year-old midfielder, Holger Rasmussen, was sold for the, back then, stunning amount of £2,207,000 to F.C. Blueshark where he still plays today, and has capped six matches for the Danish NT. The other player was the 21-year-old forward, Christian Hoej, who was sold for a bit smaller amount of £1,354,000. He was sold to another Danish club, Breakfast F.C.

In order to give the young players the best possible training, the club immediately started building a Youth Academy and a Research Facility. 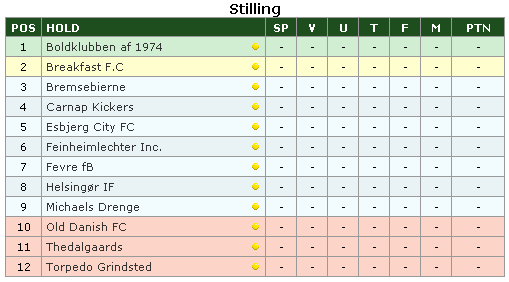 Winner of Youth League in 1. Division A in season 1.

Most Goals Scored in a Match: 9 goals by Lucas Greve in this match.

Many has asked the question - does it pay off? The question can't really be answered as it depends on a lot of things. You need more than just a few young and talented players. You need a good coach. You need to ask yourself the question, whether paying off means in money or in performance? Of course, performance leads to money too in form of price money and increased ticket sale.

These are almost every youth player this club has sold (few aren't worth mentioning) for a total sum of £7,756,200. So has this been profitable for Fevre fB? Yes, because not just have the transfer income been higher than the expenses for YA and RF, but as you can see below, there are still many players in the first team who has been playing all their life in the club.

Players marked with a * is a player grown in the club (have been in the Youth Academy for at least one season).

Retrieved from "https://dugout-online.fandom.com/wiki/Fevre_fB?oldid=3939"
Community content is available under CC-BY-SA unless otherwise noted.