Denmark U21 have had two managers so far. The previous being JohnniBoy and the current being Fevre.

Denmark U21 was qualified to the very first Dugout-Online World Cup after finishing second after Italy U21 in their qualification group.

In the World Cup itself, Denmark U21 was grouped with Slovenia U21 and Finland U21. After beating Finland U21 1-0, the team had qualified to the last 16.

Yet again, JohnniBoy showed great tactical skills and Denmark U21 beat Austria U21 2-1. The highly seeded Portugal U21 was the team awaiting in the Quarter final. Denmark U21 lost 5-0 after Teodoro Salvado scored an amazing five goals grabbing the MOM too! Portugal U21 went on but was beaten by Croatia and got bronze against Spain. Croatia won the first Dugout-Online World Cup 2-0 against Holland in the final. 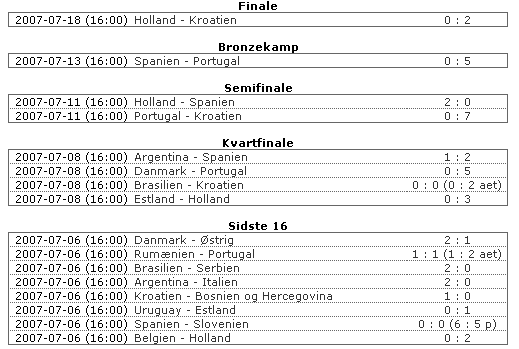 The qualification rounds to the second World Cup has ended. Denmark U21 did, as the only Danish NT, not qualify for the WC after losing twice to Hungary U21.

Retrieved from "https://dugout-online.fandom.com/wiki/Denmark_U21?oldid=3506"
Community content is available under CC-BY-SA unless otherwise noted.